WHAT YOU GET: This recipe is for Garibaldi biscuits, a popular British snack that is a classic companion to your afternoon tea.

Garibaldi biscuits are beloved tea-time cookies — despite their less than appealing nicknames: flies graveyard or squashed fly biscuits. Don’t worry; their nickname has nothing to do with what’s in the actual recipe. Brandy-soaked currants and cinnamon sugar sandwiched between simple thinly rolled delicate shortbread.

The currants give this cookie a wonderfully chewy texture, and the adult flavors of the fillings perfectly pair with the crunchy shortbread. When you dunk it into your cup of tea, it somehow becomes even more delicious.

The History Of Garibaldi Biscuits

Depending on where you live, these biscuits may be known by other names. They’re called “Full O’Fruit” in Australia, and in New Zealand, they go by “Fruitli Golden Fruit.” For a bit, the Sunshine Biscuit Company, which Keebler bought, made their own version in the US called “Golden Fruit.” In 2001, when Kellogg’s obtained the Keebler company, Golden Fruit was discontinued. Cookie politics, man — very dramatic.

The cookies were allegedly invented in 1861 and named after Giuseppe Garibaldi, an Italian general. No one is really sure why the cookies were given his namesake. What’s The Difference Between Currants And Raisins?

While you can use chopped raisins in this recipe if you can’t find currants, there is a difference between the two dried fruits.

Raisins and currants are dried fruits from different types of vine-grown grapes. Currants go on bushes and are more tart than they are sweet. Raisins are dried white grapes, which become darker as they dry. They are sweeter than currants.

Since they are dry, both fruits easily absorb liquid, making them great to work within desserts, as you can soak them in alcohol or other flavorful liquids.

Try These Other Recipes! 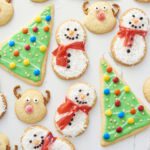 Gemma I made these biscuits and they were wonderful! I used chopped raisins and soaked them in rum. I think next time I will double up the pastry amounts and slightly increase the fruit, so that I can have more biscuits!

As a kid growing up in New Zealand we always called these “Fly Cemetery biscuits”,

Can I make these with Gluten Free Flour?

I just zoomed in on one of the pictures and wondering if Sugar in the raw was used and if not would it work with the cinnamon mixture?

Hello Gemma, I made your Garibaldi Biscuits and for some reason some of them came apart as I was lifting them onto the plate. Is there something I am doing wrong they just seem to want to stay together.

I made these and used some left over mincemeat pie filling I had, oh my goodness so good. I am getting ready to make another batch now.. Thank you Gemma I just love your recipes..

Just made these, really amazing! I’m definitely trying this recipe. It reminds me of poptarts and I’m already thinking and wondering if another kind of filling would work like a jam? Love all your recipes and videos Gemma, you are the best!😊❤

Not being a drinker of liquor, going to the liquor store to get brandy is confusing. There is a myriad of flavored brandies and I’m at a loss as to which to get. The cashier hasn’t a clue…not in their purview lolol
So, what type of brandy do I get?

Hi Gemma. This recipe sounds delicious. Can these biscuits be frozen?