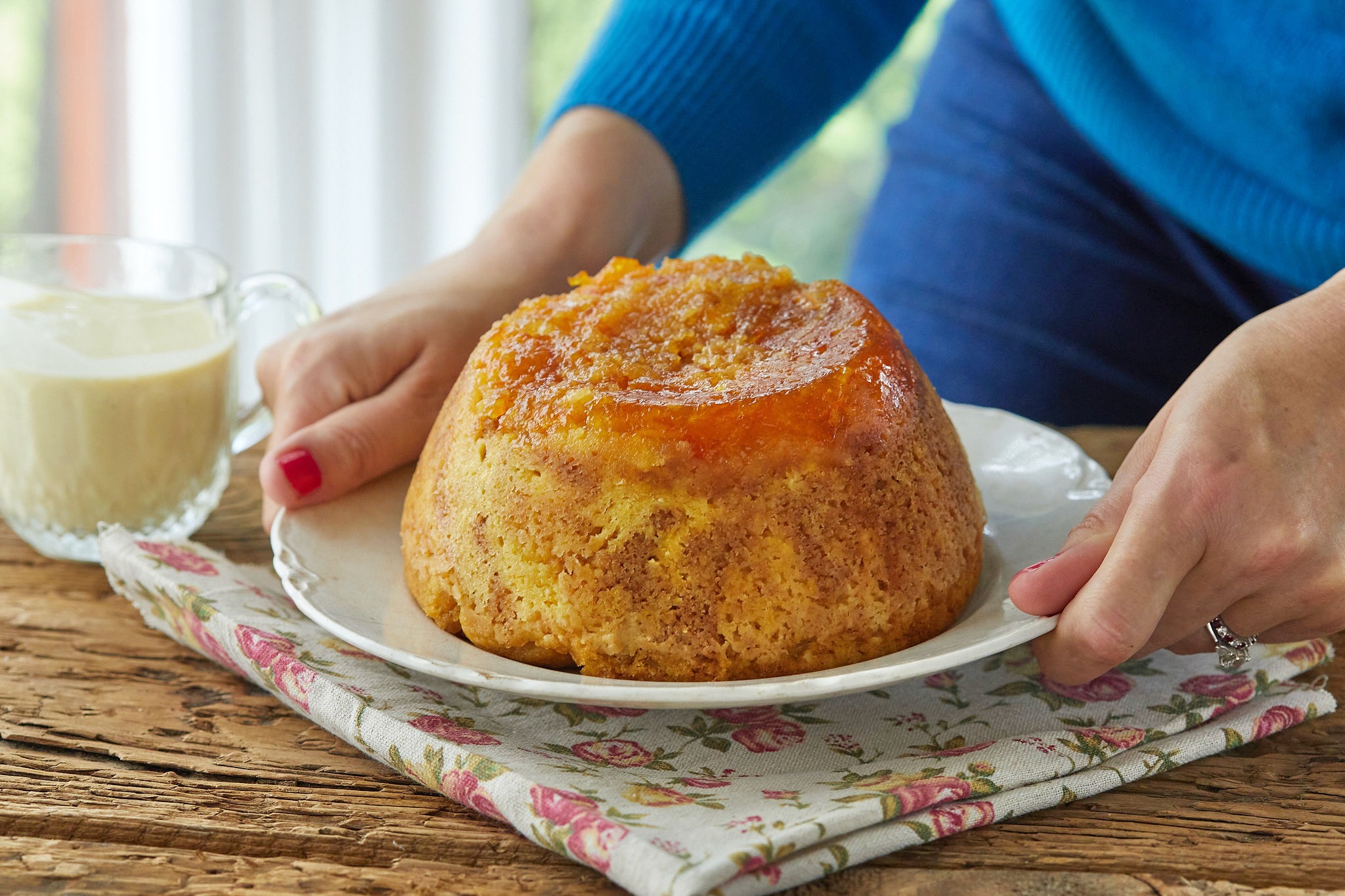 Streamed Marmalade Pudding may not be a common dessert in the US, but it’s a favorite in both England and Ireland. Actually, this steamed marmalade pudding may — no joke — be my favorite new dessert this year!

Steaming cakes, or “puddings,” is very common for us back over the pond. A good steamed pudding brings up lovely memories from childhood for many people who still live in the UK and Ireland and for any ex-pat. For those unfamiliar, this is a cake batter that is steamed. And this steamed pudding recipe results in an unbelievably moist cake that is irresistible when paired with my Creme Anglaise. It’s tangy, sweet, creamy, soft… everything!

A steamed pudding is an easy dessert to make (you can check out my How To Steam A Christmas Pudding informational article if you need to, too), and I am so excited for you to try it out for yourself if you’ve never had one! And even more excited if it brings up some fond memories of your home if you have had it before! What Is A Steamed Pudding?

Steamed pudding isn’t really like pudding. Actually, it’s more like a very moist cake — but instead of baking the cake ingredients, they are put into a mold and slowly steamed for about 2 hours. It’s a simple, easy dessert that needs little attention while steaming. You just have to check to make sure the water doesn’t boil dry.

What You Need To Make Marmalade Pudding How To Make Steamed Marmalade Pudding

After making this, you’ll understand why Christmas carolers go from wishing you a “Merry Christmas and a happy new year” to demanding “Bring us some figgy pudding and bring it right here!” Here’s how you make steamed marmalade pudding (and don’t forget to get the full recipe with measurements, on the page down below): How Do I Store Steamed Pudding?

You can store steamed pudding in your refrigerator for up to 3 days. Oh please, please do a video! I want to try this, but I’m very intimidated 😃

Tastes awesome ! Absolutely divine ! I’m so happy with the result. Have uploaded the picture. Gemma your recipes are so perfect…gave me the required confidence as a new baker.
Thanks for sharing this amazing pudding recipe.
Love 💕

Absolutely delicious. Everyone loved it. I have never made many puddings before following your site. Last year was my first Christmas pudding and I will make that again this year. I love your site and watching your videos. Thank you from New Hampshire 🙂

Any idea of how long to steam this in a instapot pressure cooker on steam? Or would it be for the same amount of time?

Made this today and it’s absolutely delish, can’t wait to try a lemon one but as I live alone this one will last a few days…….or maybe not!
Thank you

I made it exactly following the recipe. It is spectacular! I plan to explore some additional “pudding” recipes and am ordering a real pudding basin. The only problem I had was unmolding it. Some of the marmalade (actually most of it) stayed in the mold.. Did I unmold while it was too hot. How long do you usually wait. I have some ginger preserves. I am thinking about trying it with those or perhaps half ginger and half orange.

Wow yes remember all those steamed pudding spotted dick Christmas puddings with Birds custard. I grew up In Ireland. Galway. Now. Living out side Boston

Hello, is there a GF option you can recommend?

I love steamed puddings! Sometimes I pour a maple syrup in the basin before adding the batter, and it makes a wonderful top for the pudding.

Hello dear and amazing Gemma,
Is there some error occurred or this recipe is not supported by video?

All the best from Mne