So, let me paint you a picture… It’s Christmas week, you are not going home to Ireland for the holidays. And this year your Mammy didn’t send you a food parcel in the mail with the essentials. You realize you have no Christmas Pudding for dessert and have no idea where you will get one.

Well, fear not! Because although there is usually a big rigmarole about the making of Christmas Pudding there doesn’t have to be. Sure my Mum used to make hers in October so the flavor to develop over the weeks leading up to Christmas.  However, if you find yourself late December without a Christmas Pudding to serve on the big day then there is a solution… and that is my Microwave Christmas Pudding.

Full of flavor and incredibly moist this pudding will satisfy your craving this holiday.

What is Christmas Pudding?

Christmas pudding is a type of pudding traditionally served at the end of the Christmas dinner in the Britain and Ireland. It originates from medieval England and is sometimes known as a plum pudding though this can also refer to other kinds of boiled pudding involving dried fruit. Despite the name “plum pudding,” the pudding contains no actual plums due to the pre-Victorian use of the word “plums” as a term for raisins.

The pudding is traditionally composed of thirteen ingredients, symbolizing Jesus and the Twelve Apostles, including many dried fruits held together by egg and suet (pork fat), sometimes moistened by treacle or molasses and flavored with cinnamon, nutmeg, cloves, ginger, and mixed spices. The pudding is usually made in October so it can be aged for a month or more, but sometimes even a year. The high alcohol content of the pudding prevents it from spoiling during this time.

Why is Christmas Pudding Set on Fire?

Brandy or another alcoholic drink often poured over the pudding and lit at the table to make a spectacular display. This is said to represent Jesus’s love and power. Also, a decorative sprig of holly on the top of the pudding is a reminder of Jesus’ Crown of Thorns that he wore when he was killed.

How do you Store Christmas Pudding?

Once steamed, you can store Christmas pudding in the pudding basin at room temperature in a cupboard. Keep it dry and out of direct heat and light.

How Long does it Last?

One of the beauties of this pudding is that it will only get better with age. It keeps fresh for months (even a year) due to the alcohol content preserving it. In my house my mum would make her puddings in October to have them reading to be eaten at Christmas. I found this article on whychristmas.com really interesting when researching the origins of Christmas pudding. I have eaten this pudding since I was a child and I never knew its rich history. 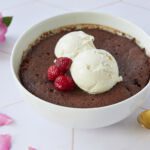 Hello, I made these into mini pudding versions using ramekins to give away as presents. I’ve de-basined them and wrapped in baking parchment followed by tin foil. How long can I expect them to keep for?
Thanks

Do you have a recipe for plum pudding?

Could I use your mincemeat hack instead of buying separate ingredients for this ?

You said to add the pumpkin spice and then went on to say how much of each spice. I have the pre-mixed spice, do I add the pre-mixed abd also the individual spices?

Hi Gemma, in place of butter can I use either beef or vegetarian SUET .. if so how many grams? …Eucharisto 🇨🇾 Thanks

Looks delicious. Can I make it in the oven instead of using the microwave?

Hi Gemma, What is mixed peel?