Get 10 Make Ahead Thanksgiving Dessert Ideas! WHAT YOU GET: Finally, an answer to the age-old question: is homemade pie crust cheaper than store-bought, and even if it is, is it worth it?

If you’ve read my Budget Baking: A Baker’s Guide To Shopping & Saving Money, you’ll know that one of my baking budget tips is to make your own homemade ingredients. And if you’ve read any of my pie recipes before, you know that I frequently tote the benefits of taking the time to make homemade pie crust!

I’ve broken down how much making pie crust at home costs versus buying a pre-made crust at the store and was surprised to find that I was able to make my favorite pie crust for less than $2!

Right now, due to demand, the price of ingredients is high, especially butter, which is one of the most important ingredients for pie crust. (I can’t be the only one gasping at these prices in the dairy aisle, right?!)

The following prices of ingredients are based on an average of prices I found at different stores throughout the US, based on data from September 2022.

Of course, these could cost a bit more or a bit less, depending on where you are located. For example, in some cities in the US, I saw that a pound of butter was over $6!

Which brand you opt for also makes a difference — store brands tend to be cheaper than name brands. Keep in mind that the more expensive option isn’t always the most delicious.

Despite all this, making pie crust at home is still cheaper than store-bought pie crust! Here is the full recipe for my homemade pie crust! 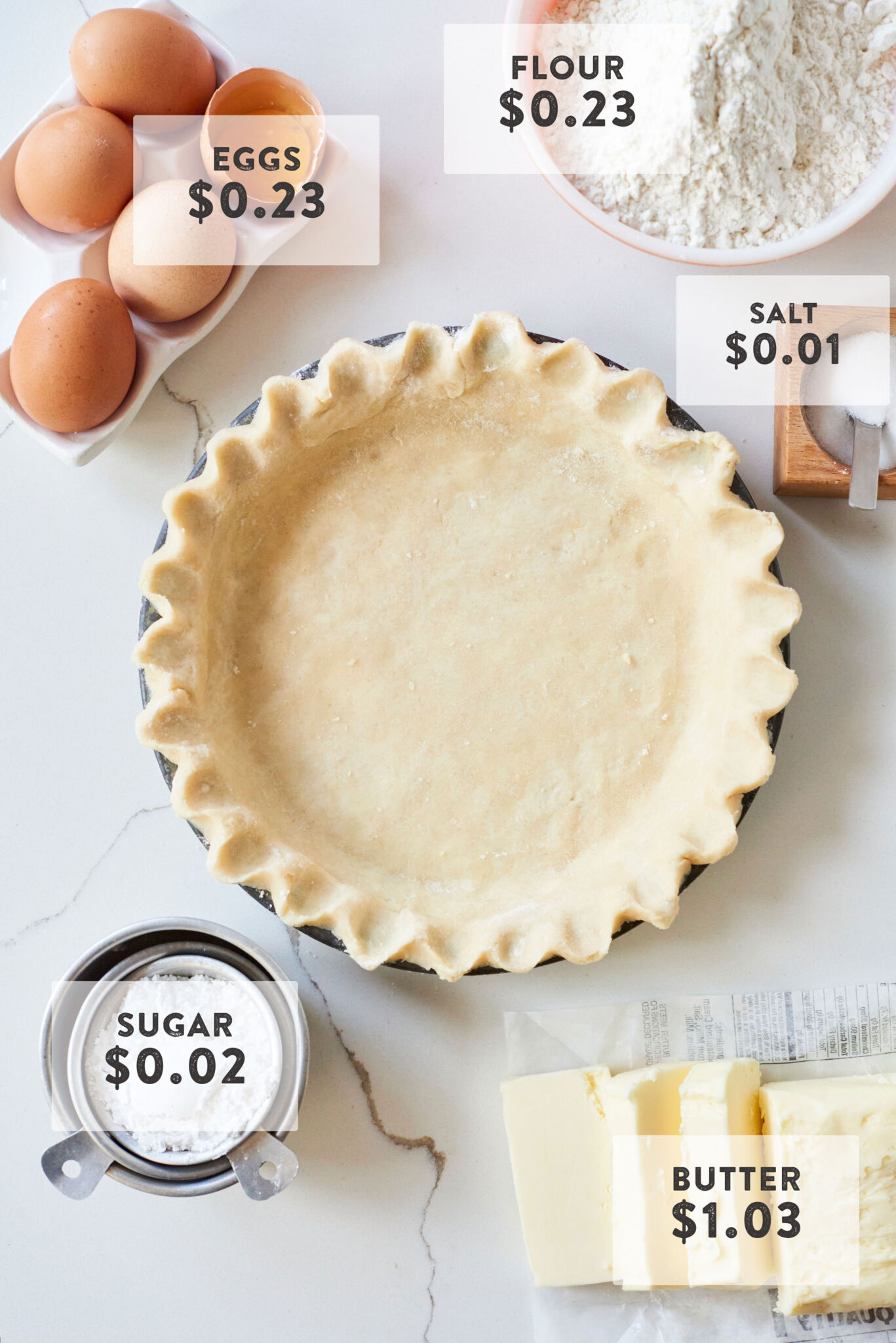 Total: $1.52 (again, depending on how much the ingredients cost in your neck of the woods!)

For store-bought, I chose to compare two of the most popular store-bought pie crust choices. Keep in mind these prices will be different depending on where you are located.

Is Making Homemade Crust Worth The Time?

Refrigerated pie crust comes ready to go; it’s even rolled out for you! And frozen pie crust is even easier, as it’s already prepped in a tin, ready to be defrosted and filled. It’s a super convenient alternative, and you will still achieve a great pie.

So is a few bucks worth spending the time to make a homemade crust? If you’re baking a lot during the holidays, a pretty expensive time of the year, the answer may right away be yes!

But there’s an argument to be made that it’s always worth it to spend a little more time in the kitchen to make your own pie crust from scratch.

Making pie crust is a skill you’ll get better and better at, but usually, it will only take around 15 minutes of prep to make your dough, some time to chill in the refrigerator, and, depending on your recipe, 20 minutes or so of a blind bake.

You can also make your pie dough (or several) ahead of time and keep them in the freezer for up to 8 weeks.

Everyone has their own opinion, but I always think homemade pie crust tastes better.

Homemade pie crust is flakier than the store-bought version. I tend to find store-bought crust to have more of a crumbly, dry texture. Plus, you can really taste the butter in homemade pie crust; frozen and refrigerated pie crust, to me, tastes incredibly bland. There’s nothing like digging into a pie with a flakey, buttery crust!

I won’t claim that homemade pie crust is any healthier than store-bought, but I can claim that I know exactly how it is made and the quality of ingredients I am using! For me, there is comfort in knowing what you’re eating is made with good, simple products.

What’s Best For You? Homemade Pie Crust Vs. Store Bought

If you’re strapped for time, there’s nothing wrong with using store-bought pie crust. However, if you want to save money and have an absolutely delicious pie, I highly recommend making your own!

Plus, you get to tell your friends and family you made it from scratch. Bragging rights are priceless.

Stretching Your Dough: How to Bake on a Budget

Hi, Gemma. I appreciate your tips and recipes. Please tell which food processor you use/prefer. I have shopped for one but there are so many and bad reviews for all. I would feel better if I used what you use/recommend. 🙂 Thank you and Happy Holidays!

Cant I have the written recipes please ,sound not good

Does it need to be cooked any before adding pie filling?

Ok Gemma, thank you so much for all you do…your recipes are amazing & I love your presentation. However my crust won’t turn out well without measurements. Please give me the amounts needed.
Thank you.