Check out all my NEW no-machine ice cream recipes! 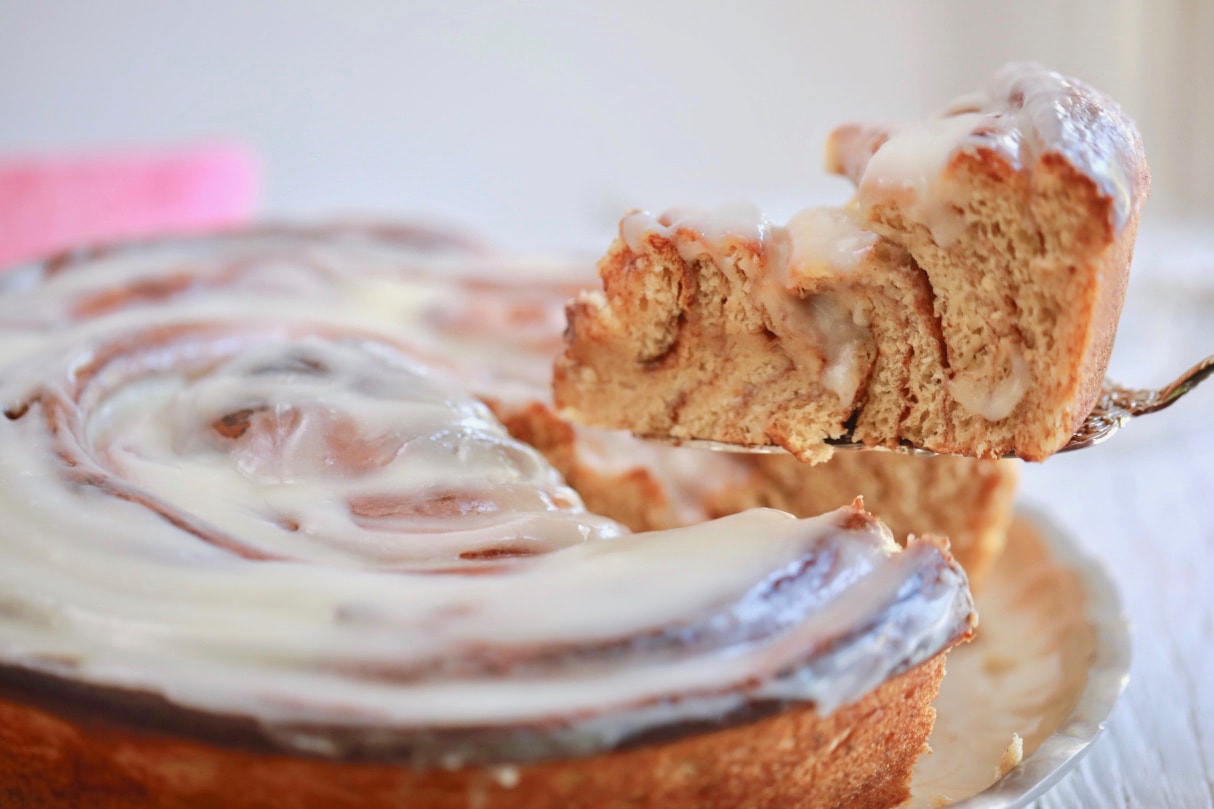 As a professional chef and Bold Baker, I love to find new ways to transform my favorite recipes and take them above and beyond. From developing new flavors to styling my desserts, there is nothing more satisfying for me than pushing the envelope. My Giant Cinnamon Roll in a Skillet is like nothing I’ve ever made or tasted before. When you think of cinnamon rolls, you’re sure to think of a sweet yeasted dough stuffed with cinnamon sugar and covered in a sweet glaze. Well, imagine that same cinnamon roll but in the size of a skillet! Now that’s big.

How Do You Make Homemade Cinnamon Rolls?

Although cinnamon rolls may seem like they require a high-level of skill, my giant cinnamon roll recipe breaks down all of the steps and makes baking so easy and fun. Baking a yeasted dough is really just a matter of combining wet ingredients into dry ingredients and then kneading the dough. I do this easily in a large stand mixer with a whisk attachment. After the dough is formed, the real work is done and all you need is time. The yeasted dough takes time to rise (or “proof”) and develop flavor, and is well worth the few hours it takes.

After your dough has proofed comes the fun part – rolling out the giant cinnamon roll! I roll the yeasty sweet dough into a large square and lather it with butter and a mixture of cinnamon and brown sugar. This will create that caramelly, sticky filling. The next step is where this recipe takes a turn for the bolder. Instead of rolling up the dough into little and traditional handheld rolls, I cut my dough into strips and wrap those up into my GoodCook 10″ Cast Iron Skillet. I love to use this skillet for both sweet and savory cooking. It’s the perfect size for all kinds of baked goods – from tarte tatins to upside down cakes! Once the strips of dough are braided within the skillet, I let it proof once more so that it grows into the most impressive giant cinnamon roll that you have ever see. For all the time it takes to rise, this giant cinnamon roll recipe bakes up in only 25 minutes.

I am telling you – this showstopper is well worth the wait! Baking in cast iron is one of my favorite things as it creates a flavor like no other. If baking in a cast iron pan is something you’ve never tried before now is the time! My GoodCook 10 Inch Cast Iron Skillet is near and dear to my heart, as it heats ups super efficiently and retains just the right amount of heat when baking or cooking. This is ideal for baking things like homemade cinnamon rolls and other sweets as the cast iron is what really created all that caramelization that makes sticky buns or cinnamon rolls so crisp while having that sticky sweet outer layer. I can’t wait for you guy to give cast iron baking a go!

How Do You Make Cinnamon Roll Icing?

No cinnamon roll recipe is complete without a thick layer of sweet and tangy glaze! My glaze is super simple and perfectly whips up while the giant skillet cinnamon roll is baking.  After my giant cinnamon bun is baked and still warm, I generously cover it in the glaze. The glaze really absorbs into the giant cinnamon roll and uses cream cheese, vanilla extract, and powdered sugar. This makes for a heavenly flavor combination of cinnamon roll frosting, yeasty light dough, and decadent cinnamon filling. Giant Cinnamon Roll in a Skillet

While the skillet cinnamon roll is in the oven make the glaze:

Cover and store at room temperature for up to 3 days.

Thank you for your awesome recipes! Can the dough be made the night before? I’d like to get it in the skillet and do the final proofing and baking the next morning. Thank you!

Hi Gemma. Made this today for Fathers Day.. Looks impressive and tastes amazing. So much easier to make than you would expect, once I watched the video anyway!! Next up is the Deep dish Pizza which I am planning on making during the week.

Added a picture for you Gemma.. Thank you as always 🙂

Hi. I’d like to try your cinnamon rolls but I have a house full of cream cheese haters. Is there another frosting that would work well without the cream cheese?

I made the sticky buns , they were absolutely yummy

The link to Goodcook.com no longer works, thus, I can’t find this recipe? Please help. Could I do this with your crazy dough recipe? THANK YOU!!

Can I put my skillet in the fridge until Im ready to bake it the next day?

Is it okay to cook the cinnamon roll in a cast iron skillet the same size but is deeper?

Sounds delicious. Thank you for sharing. I love pecans & golden raisins in my cinnamon rolls. Could you tell me how much and how to incorporate this into the recipe? Best,

This looks very good. Could this dough be mixed up in a bread machine on the dough cycle? I like using the bread machine for mixing and raising rather than my Kitchen Aid machine. Thank you very much.