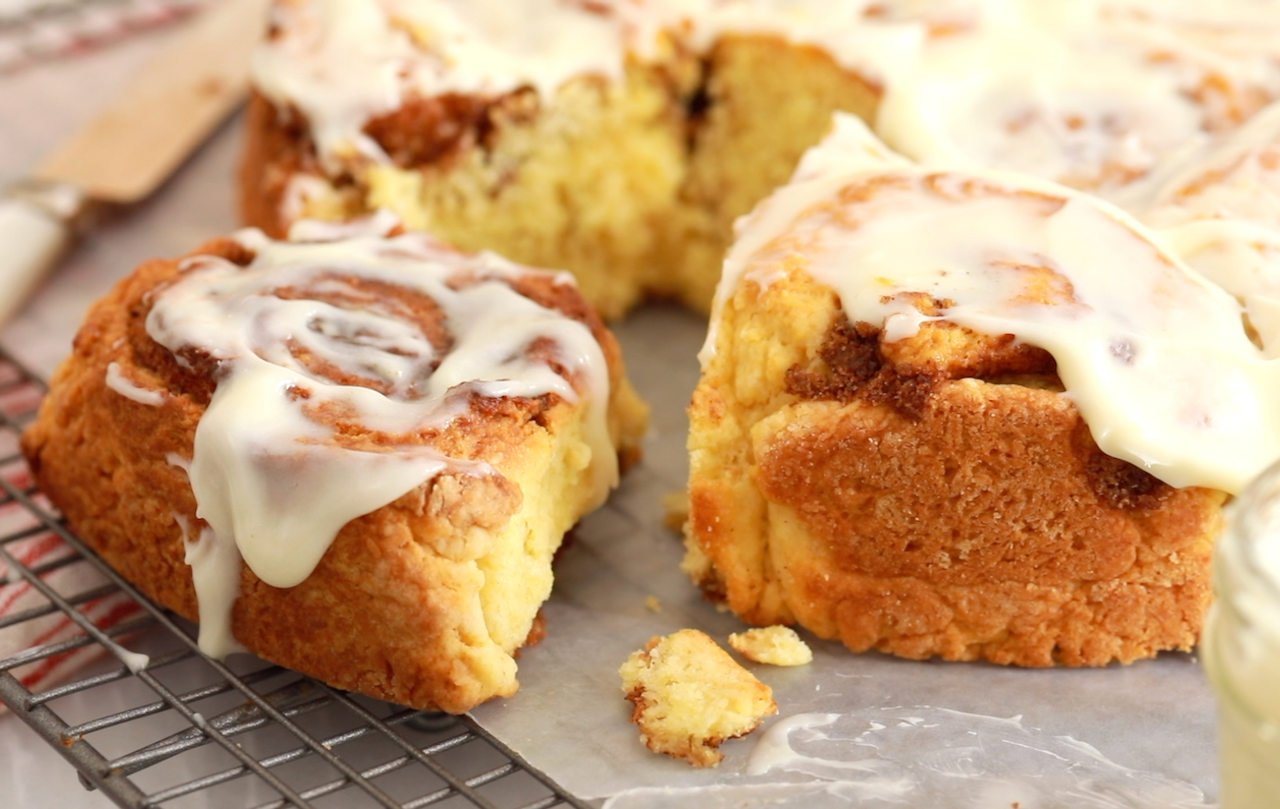 I adore making yeasted dough! From the texture to the smell I just love every aspect of it. Saying that, If I could cut down the time from when I make my dough until I am putting it in my mouth, then I’ll just take that option. I’m no fool!

Cinnamon rolls can seem like a process, but with this incredible No-Yeast Cinnamon Rolls Recipe up your sleeve you can bake up this classic sweet treat in no time with ease! While normal cinnamon rolls can take up to a minimum of 4 hours before you even get them in the oven, this no-yeast version can be made start to finish in under an hour.

They come out fluffy and tender, filled to perfection with cinnamon sugar, and then generously slathered with the quintessential cream cheese glaze. Who could say no to that? How To Make A Cinnamon Rolls Recipe Without Yeast

While other cinnamon roll recipes require yeast, this one is super unique as it rises up into a light fluffy roll without the yeast and in way less time. While yeasted dough taste lovely, they can be time consuming. I don’t know about you but when I want cinnamon rolls I don’t think, “Oh I really want to enjoy one 24 hours from now,” I want one a.s.a.p.!

Usually, cinnamon roll dough needs to ferment or proof. This adds air to the dough and is what makes the dough puff up. Most cinnamon rolls actually have to proof 2 times, one before being filled and rolled and once after being filled, before they are baked. While this yields a lovely result it takes a lot of patience and effort.

The secret to my No-Yeast Cinnamon Rolls Recipe is in the combinations of cold butter, sour cream, and baking powder. The cold butter is cut into the flour like you would do when making a rough puff pastry, and this adds richness and flaky layers to the dough. The sour cream binds everything together and tenderizes the dough, making it elastic and great for rolling up like a traditional cinnamon roll. The baking powder is, of course, the raising agent that takes the place of the yeast, making sure my no-yeast cinnamon rolls are fluffy. After the no-yeast cinnamon roll dough is made, the rest of the process is business as usual: I fill my rolls with a mixture of butter, brown sugar, and cinnamon, because what’s a cinnamon roll without that sweet sticky aromatic filling? At the end, I then top these with a super rich glaze — made not just of powdered sugar and cream cheese, but a bit of butter and vanilla extract too. The finished no-yeast cinnamon rolls are gorgeous, no one will ever know how much time you saved making them!

[ Out of cream cheese? Make your own! Here’s my Homemade Cream Cheese recipe! ]

What If The Dough Is Too “Loose” or Too “Sticky?”

In the video for this recipe (above!), I share a really important trick for getting dough to be the perfect consistency.

When adding the wet ingredients into the dry, I always hold back a bit of the wet until I bring the dough together. This is because you can always add more but you can not take away. I start on the drier side, then I add the sour cream and egg mixture little by little until I am left with a soft elastic dough that isn’t too wet — but also is not crumbly and dry. I do this with all dough, be it bread or pastry.

Can you make these the night before you bake them?

One of the coolest things about my No-Yeast Cinnamon Rolls Recipe is that it’s way less temperamental than a yeasted dough. If you want to make these ahead and bake them off in the morning, the unbaked cinnamon rolls keep covered in the fridge for up to 2 days. In the morning you can pop them straight into the oven and just chill while your house fills with the incredible smell of freshly baked cinnamon rolls.

Can I Make These Without Sour Cream?

If you don’t have sour cream, and that’s why you’re asking, you can always just make some! Here’s my recipe for Homemade Sour Cream. For the No-Yeast Cinnamon Roll Dough

I made this twice and same problem. When I add sour cream, 2 egg yolks and vanilla the dough is still crumbly and doesn’t blend together. First time did it by hand. Second time use a dough hook. Should I add another egg yolk or sour cream or??? To hold dough together so it can roll easily. I put it in frig, it helped a bit. Seemed lined it needs more liquid. They taste great! Not giving up!!! Lol!

Oh, my sweet cinnamon rolls! I love cinnamon rolls but haven’t had them for years because I can’t eat gluten. Yeast doughs just don’t work well with GF flours. Since there is no yeast in these, I thought I’d give them a try with King Arthur measure for measure GF flour. And it worked!!! They are delicious. I haven’t made them with regular flour so I can’t compare but even though people know I bake GF, they kept asking if they were really gluten-free. The one thing to note is whenever I substitute GF for regular flour, I use a… Read more »

Made this, again, for huz. I’m finding rubbing butter difficult, so used just out of the freezer butter and grated it; a la Irish scones. Worked a treat.

Hi Gemma, your recipes are great, have tried most of it. I have a question about this cinnamon rolls that is can i use self rising flour instead of all pupose flour?

I made these a couple of times now and i have to say i absolutely love this recipe. Thank you Gemma for sharing this. My family and friends loved it.
God bless you ❤️❤️

Served this to my church family b4 our bible study and everyone loved it! I was so proud of myself . i reccomend this recipe , not only is it easy to follow its delicious!! Thankyou so much!

Hi Gemma 🙂
Can I use a food processor instead of rubbing the butter into the flour mixture? Saves a lot of time…

Open the computer, I have to visit your blog right away. My family enjoyed the recipe you shared. Have a good day.

Hi Gemma
I know these are quick to make, but we’re trying to cut back on energy use and make the most of the oven when it’s on. Can I freeze these after baking or is it better before baking?