Monkey bread is big and bold to begin with, as its a lot of little pieces of sweet yeasted dough baked together in a pretty bundt tin. Just the fact that monkey bread is served in a pull-apart fashion gets me going, but cover it all with sticky bun flavors, add in toasted nuts, and I am over the moon.

Trust me, you and whomever you share this with will be too!

Why is it called monkey bread?

Named after the way it’s eaten, when digging into monkey bread you pull little parts of it off and eat it one by one as opposed to taking a slice. Like a monkey!

My Monkey Bread Recipe is made possible by lots of little individual balls of yeasted dough being shaped, dusted in cinnamon sugar then proofed all together in a bundt tin. The cinnamon sugar creates a barrier between each ball of dough allowing them to be pulled away from one another after baking. Making the dough is similar to making a yeasted donut dough, but instead of being shaped into a circle and fried the dough is rolled then baked. The flavor is somewhere across between a donut and a sticky bun, and I can’t really imagine anything better than that.

Before I pile the cinnamon sugar dusted pieces of dough into the bundt tin, I pour caramel sauce in the bottom of the tin. This sticks the dough together, but also glazes the dough and caramelizes it just like a cinnamon roll or sticky bun. This might sound unlike anything you have ever had before, because it is unlike anything you’ve ever had. Seeing as there is no store-bought copycat, you have to make this at home and I am telling you it is well worth it. How do you shape monkey bread if you don’t have a bundt pan?

To Shape the monkey bread you really let the dough do the work. After the yeasted dough has proofed for the first time, you punch it down. Next, I use a dough cutter, but you can use a knife to cut the do into a bunch of little pieces. After I cut the dough I roll each one using the palm of my hands, tucking the seams of the pieces underneath themselves to form a perfectly round ball. After this, the shape of the tin is what dictates the shape of the finished pecan monkey bread.

This is why I use a bundt tin as it just looks iconic and pretty. If you do not have a bundt tin, you can use a regular large cake tin, but the effect is not quite the same. It’ll still taste GREAT though!

How can you tell monkey bread is done?

This monkey bread bakes up perfectly. Even though the balls of dough may be different in size, they still bake up in the same amount of time. Once the pecan monkey bread has cooled slightly I turn the tin out, revealing toasted nuts and a beautifully caramel glazed monkey bread. This monkey bread tastes every bit as good as it looks.

It’s one of my favorite things to serve to people because it’s not only super gorgeous, but so much fun to eat! 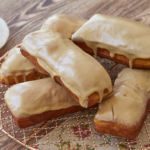 To Make the Sweet Dough:

To Make the Caramel Sauce:

To Make the Cinnamon Sugar:

To Make the Sweet Dough:

To Make the Caramel:

To Assemble the Monkey Bread:

The recipe turned out great, my whole family loved it, but I made some changes that I highly recommended doing: If you’re using INSTANT dry yeast, then follow the recipe as instructed But if you’re using ACTIVE dry yet, take the 1/3 cup of water listed in the recipe, add 1 tsp of sugar, and then warm up until the water is blood/lukewarm. Then add the yeast and let it sit for about 5 minutes until it starts to foam, and then add that in to the dry ingredients with the rest of the wet ingredients. The difference in yeast… Read more »

Hi Gemma! Love love your videos! Thank you so much…. I have a question…. for a short cut, could you use frozen bread loafs from the freezer section in the store? It’s unbaked and you have to let it proof as well. Your thoughts?

This is the Caramel Pecan Monkey Bread that I made taken straight out of your second cookbook bigger bolder baking everyday. I absolutely love the book I just got it for Christmas and this is the first recipe I tried and I’m so glad it was my first recipe I tried it was a big hit with all my family and friends and I can’t wait to try more recipes from the book. By the way I love your videos so much your one of my favourite baking influencers and you just inspire me so much and make me want… Read more » Question please: “To make the day before refrigerate the bread once assembled, bake the next day”
Do i put it in the oven straight from the fridge or do I let it get to room temperature first?
Thank you❤️

Absolutely delicious recipe!! I opted out of the cream cheese and nuts but it was still fabulous! I also didn’t need all the caramel. Just about half was fine and baked mine in a 8×8 tin with baking sheet under to catch caramel bubbling over. YUM!!!!!!👩🏻‍🍳

I had some caramel leftover from the apple caramel cake,so used it to make the monkey bread today.I used pistachios as I don’t have pecans.
I had also made the pizza monkey bread previously.
Both are just wow😃❤👌👌

Thank you, Gemma! This one is a keeper ❤️ we tried it and we love it.

So my dad loves monkey bread and I decided to make this for him when he comes to visit next month. I also decided to use my family as guinea pigs and make a batch tonight since I’ve never made it before. I suddenly don’t want to share with my dad….

I have made this a few times and loved it but I just don’t remember the recipe having a cream cheese stuffing ,didn’t you have a recipe that didn’t include cream cheese? Well, maybe you didn’t and I just opted not to use it Humm….

Can you make this without a dough hook as I don’t have one.