One of the Bigger Bolder Baking team’s favorite recipes is Gemma’s Best Ever Blondies. Who could resist the texture of a brownie infused with the flavors of caramel, vanilla, and white chocolate? Even though I’m a self-proclaimed chocoholic, blondies hit the spot in a whole different way.

Just like the rest of my recipes, my style is all about the classics reinvented. Made with coconut sugar, monkfruit sweetener, and almond flour, my Gluten Free Blondies are every bit as rich and decadent as the original recipes you’re used to.

Are these gluten-free blondies also dairy free, Paleo, and Keto?

My gluten-free blondies recipe starts with both butter and coconut oil, as well as coconut sugar and Lakanto sugar. The mix of these ingredients is the key to cutting the sugar and lightening up a classic blondie without losing out on any of that brownie-like texture.

Instead of flour, I use almond flour, which adds healthy fat and makes the blondies free from gluten. My recipe is also somewhat low in carbs, grain-free, and high in fat — so it is very paleo friendly and can be made dairy free or vegan by replacing the eggs with a flax egg and the butter with coconut oil. I love how many boxes this recipe ticks. Is the texture the same as a regular blondie?

I’m sure many of you have noticed that lots of my recipes utilize the same ingredients I’ve used here. It’s the ratio and blend here that’s truly perfect and creates the perfect Gluten-Free Blondies. Think crisp outside and moist rich center, then studded with sugar-free white chocolate — I don’t know anyone that could say no to that. My gluten-free blondies do bake off slightly different than a regular blondie due to the alternative sugars, but if you notice the blondies seem underdone after the full amount of bake time, do not be tempted to keep baking as they will set up once cooled.

How long do gluten-free blondies last?

My gluten-free blondies are of course best when fresh, but they keep very well in an airtight container at room temperature for 3-4 days. They are really nice when warmed up in the microwave for a short time, then topped with Gemma’s dairy-free ice cream. DREAMY! 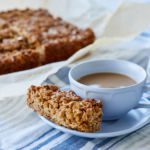 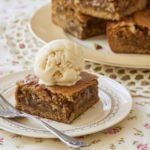 This looks amazing! What can I substitute for the monkfruit sweetener. Can I use regular white sugar?

Hi Gemma, I love your gluten free blondies ..thank u for a healthy dessert recipe???? Just a little tip, although ghee is a healthy fat, I would advice to use butter and not ghee because if you put ghee in cakes or cookies you’ll taste it, which I think will spoil the taste of these delicious blondies, I have used ghee in Almond Cookies, and I could taste it..

Fantastic recipe! Both GF and non-GF tasters agreed these were totally yummy and indistinguishable from a “normal” treat.

Hi Gemma! May I use coconut flour for this recipe?

The article says we can replace the butter with coconut oil, but in a comment you said it would become a totally different thing. So I’m not sure what to do. Also, thanks to Liv for providing recipes that everyone can enjoy! She doesn’t get nearly enough credit.

Hi Gemma,
Can I use 1 cup of Lakanto instead of 1/4 cup Lakanto and 3/4 cup coconut/brown/date sugar? Thanks!

Hi Gemma, I was wondering if I could substitute the ghee/butter and use all coconut oil instead?

Hi Gemma love u nd ur baking tips, pls give a substitute for eggs

Yes! Ghee might even improve the taste of some goods! And, had a little doubt, will we get an almond flavour in the blondies? Even if we do,its absolutely ok bcz almond and butterscotch r a great combo! And also, can I use homemade almond flour?

What other flour can you use? My son is allergic to nuts.