I could not be more proud to announce that this year I am the ambassador for Ghirardelli Chocolate! Cue the dance music, because this is really something to celebrate!

As Ghirardelli is my favorite brand of chocolate, this is a huge honor. And it’s all in celebration of Ghirardelli’s new Grand Chips, their largest chocolate chips ever. So, to properly kick off this partnership, I created what I call “Gemma’s Triple Grands” — and you are in for a real treat.

My brand new recipe is 3 of my favorite desserts all wrapped into one — cookies, cupcakes, and cheesecakes — and they feature Ghirardelli’s Grand Chips in all their glory.

What are Ghirardelli Grand Chips?

Ghirardelli has done it again taking their world-famous premium baking chocolate and making it into the largest chocolate chips available to buy. Ghirardelli Grand Chips are 2x the size of regular chocolate chips, and that means everyone gets a bigger chocolate bite per cookie. Why these are called Gemma’s “Triple Grands?”

Teaming up with Ghirardelli means I’m able to get creative in showing off what these massive chips can do. Instead of taking the Grand Chips and just making chocolate chip cookies, I decided to create a dessert that is 3 times as Bold: my Triple Grands.
So, it’s not just a cookie, not just a cheesecake, and not just a cupcake — it’s ALL 3 IN ONE! That’s right: cookie cupcakes stuffed with cheesecake. These impressive desserts are really straightforward to make. After I whip up Ghirardelli’s Grand Chocolate Chip Cookie recipe, I press the cookie dough into the bottom on a cupcake tin. Once that’s done, I then spoon over a mixture of cream cheese, sour cream, eggs, and sugar.

All that’s left is to seal the cheesecake layer with another layer of the Ghirardelli’s Ultimate Chocolate Chip Cookie dough. After baking, these puff up to look like the perfect chocolate chip cookie cupcake. Once cooled and cut open these reveal the most perfect cheesecake center. Can you imagine a better combination? If so, let me know what other fillings you’d use in the comments below. Other Recipes That Would Go Great With Ghirardelli’s Grand Chips! 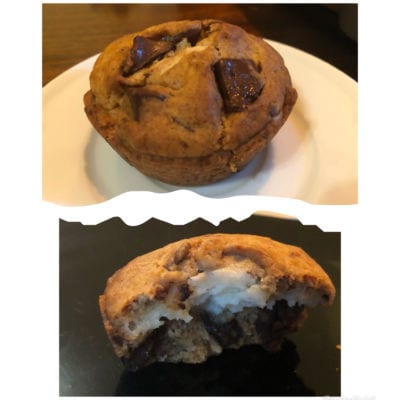 Hi Gemma.I like most of your cooking video.For this recipe instead of putting cream chesse,can i put peanut butter .Like to try it.

Hi Gemma; I made your versatile cake recipe but put a big dollop of peanut butter in it. I then baked some of the batter in flat bottomed ice cream cones. Just enough so the cake came to the top of the cone. When I served it to the kids I then added a scoop of ice cream on top. This sure was a hit with my grandkids. The rest of the batter I made into cupcakes. I sifted icing sugar on top and drizzled with chocolate topping. Also a huge hit. I’m not able to send pics right now… Read more »

Hi Gemma!
I would like to ask if you have any suggestions on the filling that can last longer? Thank you and more power ❤️❤️

Hi Gemma, I just want to confirm if this will only last for 2 days in the fridge? How could we make it longer? Thanks!

OMG this is absolutely out of this world tusm Gemma for showing us how to make this beauty!!

Hi Gemma,
I’m a really big fan of yours !!! Can I use buttermilk instead of the sour cream ?

Hi Gemma,
I made it eggless version and didn’t cover it.
Just made cookie base and filled it with eggless cheesecake filling.
It tasted good.
But the cheesecake sank.
Can you please help what can be done to correct it.
Hope I get reply
Thanking you in anticipation
Bushra

Good Morning Gemma ! Your printed recipe says 375 degrees (F) but the video states 350 degrees (F). Which one is correct ?

This is testy I love all ur recipe thank u