You know you’ve hit the jackpot when you can make something that tastes just as good as it smells! This Swedish Cardamom Buns recipe is just that, a yeasted dough that transforms into perfect treat for breakfast or in the afternoon with a cup of coffee or tea.

I love working with yeasted doughs, and more importantly, I love teaching you how to work with yeasted doughs — I’ve simplified it as much as humanly possible, so you don’t need to be afraid. Follow my steps and you’l be enjoying breakfast in no time.

If you love my Best-Ever Cinnamon Rolls recipe, you’ll love this one. And, if you have any questions on any of the steps, please leave a comment below, because we answer everyone! What Is A Swedish Cardamom Bun?

Picture a cross between a cinnamon roll and something similar to pull apart bread — and you’ve got yourself a Swedish Cardamom Bun. Baked off from a yeasted dough, you can even shape your buns the day before, on the pan, before the second rise.

Here’s a secret: if you’re hesitant on figuring out how to recreate the shape of them, feel free to roll them up like cinnamon rolls. Nobody can tell you not to!

They’re very, very similar. One of the biggest differences, though, is the use of cardamom instead of cinnamon — seems like a no-brainer, but these might look like they have cinnamon in them, but they do not.

Getting Your Dough To Rise

Every kitchen is different, and where that kitchen is on the planet is also different. It’s a simple way of saying that one of the most difficult parts of working with yeasted doughs is figuring out what works for where you are. But this much remains true: you’re going to have some trouble in a cold kitchen — the cold could make your rising periods much longer.

If your kitchen is cold, try this: To create a warm space for the dough to properly rise, you can turn on your oven for a few minutes, then turn it off and place your dough in the now warmed space. (Make sure you turn the oven off before placing the dough in there!!)

What You Need To Make Cardamom Buns Like I said earlier, if this step is intimidating, you can always shape these like cinnamon rolls — that’s totally fine. But, I think you should start by trying this method first, because it’s easier than you’d think! Either way you’re going to get something delicious in the end. I did it! I’m not going to lie, the thought of shaping the buns was intimidating. But I persevered and it is actually rather easy. The buns themselves are lovely. If you like cinnamon rolls, you’ll enjoy these. Cardamom is my spice of the month. A Sri Lankan friend of mine let me try this rice pudding type delicacy recently that used cardamom. So when I saw this recipe I gave it a try. To explain this bun, the best I can say is that it has all the sweetness you expect from a cinnamon roll, but then this wonderful… Read more »

Hi Gemma. I made these using a crossant dough laminating style. Made great cardamon pastries. Also, using a pizza cutter is easier than a sharp knife to cut the strips. For an easy way to make the knots, just hold one end of the strip & roll the end to make the twist then wind it in a circle, tucking the end piece under. Not as hard as the original knot making, but still looks pretty impressive.

is there a video showing the traditional shaping of the cardamom roll?

Sorry I think I needed a video.. didn’t have the confidence

Hi Gemma, I’m fairly new to your site/channel … but just found this Swedish Cardamom Buns recipe of yours and I love Cardamom. I’m anxious to try it, but would love to see the knot-tying in pictures. If you have some photos, please send my way. I guess I’m a visual learner and it would help me out a lot.
Thanks for all your gorgeous recipes. I’m working my way through them … gradually!
Thanks again,
Sue

I don’t see where it says to use the other half of the dough?

Hi Gemma! I can’t wait to try this out! Seems so perfect for fall! However can I replace whole milk with almond milk? Thank you!!

Is 1 ounce of fresh yeast enough to sub for 2 teaspoons dry yeast? 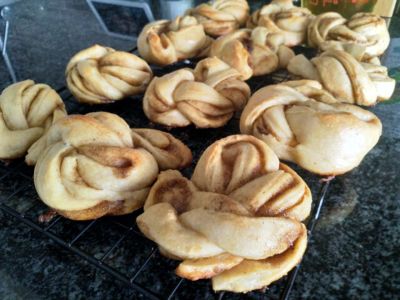