I hope you’ve had an awesome week! I know we did in the Bigger Bolder Baking Headquarters (you know, my house) — there’s a lot of recipe testing going on here, and we got to celebrate St. Patrick’s Day with George, which was so much fun!

This week on Knead To Know, we talk about what Dwayne “The Rock” Johnson is baking in the kitchen (it’s so fluffy!) and we cross our fingers that one of our favorite celebrities — who we’ve mentioned before on the show  — is getting a TV cooking series!

We also talk about the Easter version of “Elf on the Shelf,” some scandalous Great British Bake Off rumors, and the famous TV show that’s getting a new ice cream line. Our host Mia has some big thoughts about that!

Grab a cup of coffee or tea, or get baking as Mia sits down to talk through all of this PLUS a lovely chat with Joanne Chang — the award-winning founder and pastry chef of Flour Bakery in Boston!

If you love the show, don’t forget to subscribe, rate five stars, and review — let’s get to #1!

Elf On A Shelf — But Make It Easter He’s making his list and checking it twice — but it’s not Santa — it’s the Easter Bunny! Parents everywhere are either cringing or cheering because Peeps has come out with the HIGHLY creative ”Peep On A Perch,” which is the Easter version of “Elf On A Shelf”!

The kit comes with a Peeps plush that you can put anywhere in your house leading up to Easter so the Peep can “spy” on good behavior! It also comes with a fun storybook explaining how Easter Peep’s job is to assist the Easter Bunny every year by decorating eggs, filling Easter baskets, and noting all the acts of kindness a child does in the days and weeks before Easter. If they behave well, the Easter Peep will tell the Easter Bunny to put the best gifts and treats in their basket on April 4th. AKA, Big Brother is watching.

Parents, huge props to you for parenting during the pandemic — and let us know what you think of this new Peep On A Perch!

Will “Pretend Cooking Show” Not Be Pretend Anymore?

We’re here with the big questions: is Jennifer Garner’s highly relatable “Pretend Cooking Show” going to be real? If you don’t remember, on our very first episode of Knead to Know, we talked about Jenn’s “Pretend Cooking Show” birthday montage for Ina Garten. Now, she has all of us whispering about the possibility of her IGTV series hitting the actual airwaves.

In a recent interview with The Hollywood Reporter, it is said that there have been “a slew of industry requests” for her to make a “real” show. She confesses that she had to join the platform for the food brand she co-founded, Once Upon a Farm, and that she did so “kicking and screaming” because she values her privacy. But now she’s given us so much joy with this fun, lighthearted, self-deprecating cooking show!

Jenn didn’t comment on whether or not she’d actually ever go forward with the show, as big fans over here at Bigger Bolder Baking, we’re hoping that she’ll whisk us away!

Can You Smell What “The Rock” Is Cooking?

His wrestling career tagline “Can you smell what The Rock is cooking?” has truly come full circle! Dwayne ‘The Rock’ Johnson showed us how to make his favorite Coconut Banana Pancakes on Instagram this past week. The action movie and Moana star joined celebrity chef, Chef Puttie, on Instagram to share the FULL recipe.

They slather the pancakes with peanut butter and maple syrup to finish, and The Rock took to Instagram AGAIN a few days later to share a new variation of the pancakes: PB&J COCONUT BANANA PANCAKES! Chef Puttie shared that they’ve been working on perfecting this recipe for two whole months, so if you’re feeling discouraged, know that Rome wasn’t built in a day — and neither is a good pancake recipe. We JUST talked about pancake-covered bananas last week, so now you’ve got tons of new things to make!

Chef Puttie and The Rock were so much fun to watch together — maybe they can have a TV cooking show slot right next to Jenn.

Is The Great British Bake Off A Great Big Sabotage?

If you’re a fan of the Great British Bake Off, then you’re going to love the scandalous contestant theory circling the internet. Some GBBO contestants have a theory that the show purposely shoots on days with bad weather!

Season Nine contestant Antony A. said the series seems to choose the “hottest day” for ice-cream challenges, and the coldest days for bread challenges. He even said that some bakers requested air conditioners while tempering chocolate on a sweltering day… and producers told them no. Contestant Stacey Hart agreed that lots of things go wrong, like making spun sugar in the boiling heat — because sugar doesn’t like heat. Judge Paul Hollywood has absolutely denied it.

Do we think this theory is harsh? Or do we think this is true? Mia says that as someone who has worked in entertainment, she’s positive the producers have looked to turn the drama and suspense up a notch — but doesn’t think they’d go as far as picking awful weather!

Friends Gets Its Own Central Perk Coffee-Flavored Ice Cream

Friends fans, get excited! There is a new Friends-inspired Serendipity ice cream line hitting the shelves and the online store that — of course — was inspired by the show! The flavor is “Central Perk Coffee Almond Fudge,” which is a nod to the coffee shop the characters frequent in the show.

It’s described as being coffee-flavored ice cream with “thick fudge swirl and dark chocolate covered almonds.” If it brings people joy, that’s great. But Mia wonders if it would have been better to have a flavor inspired by Rachel’s Trifle or Phoebe’s Grandma’s Cookies. I also tell Mia what The Office flavor might taste like, since it’s my favorite show, but you’ll have to listen to hear!

According to the Bureau of Labor Statistics (pre-pandemic): 61% of adult women have worked in the industry at some point during their lives, for 39%, their first job was in a restaurant, nearly half of foodservice managers are women, and finally — one-third of all US restaurant businesses are majority-owned by women! Mia and I talk all about their first jobs in the industry — but I had to run to start some festivities around the house, so we’ll pick it up next time!

At The Counter with Flour Bakery founder and pastry chef, Joanne Chang Our host Mia Brabham sat down with Joanne Chang, who is one of the very top names in baking! She is a cookbook author, James Beard Award-winning chef, and the founder AND pastry chef of Flour Bakery + Café — a premiere baking destination here in the US.

Not only does she run ten Flour bakery locations across Massachusetts, but she also co-owns a restaurant called Myers + Chang with her husband and business partner, Christopher Myers! Joanne talks about her roots in a traditional Asian household, her career transition from management consulting to baing, what a day in the life looks like for her, and the creative ways she’s overcome the challenges of this pandemic as a business owner.

You can tell Joanne’s team means so much to her, and she is truly a wonderful leader. You’ll have to hear it all for yourself! 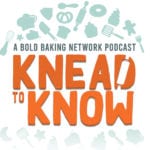